First win for H4 against Volamos

Wednesday Albatros H4 booked its first win this season, against Volamos H3. Although several players suffered from the after effects of flue, food poisoning and other mishap, for most of the time they played well and concentrated. In the first set the gap was big, 25-14, after which – as often happens – the second set went considerably less, even leading to a small loss. Yet, the team regained it’s posture and solidly finished the next two sets with good margins. Dennis, also still somewhat ill, even ended the third set with two aces. 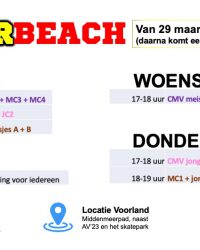